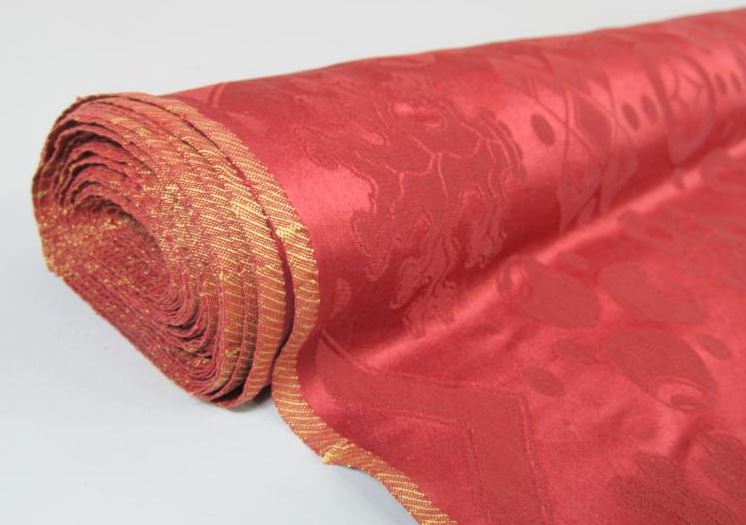 Silk in the Super-Sargasso Sea Roll of Chinese silk https://www.invaluable.co.uk/auction-lot/chinese-embroidery-red-silk-roll-141-c-ecc4d9ba79

Yesterday was Charles Fort’s birthday. One of his conceits was the Super-Sargasso Sea—the place where lost objects go and from whence they sometimes return mysteriously.  I’ve always had a special place in my heart for this idea. Occasionally books or files grow legs and I have to turn my pockets inside out or ask St. Anthony for a hand, which usually does the trick or at least re-sets the brain so I can remember where I left said items. But I’ve never had anything returned in as dramatic a fashion as this narrator.

Many very remarkable experiences have come to me during my transit through this plane of unfoldment, and the following is one of them:

My husband had been appointed by the United States Government to go  to China to look up some· matter of importance and settle some dispute between the two countries, and when he was in Hong Kong he purchased for me twenty yards of silk. The goods had been lying in a closet for several months, when I had a dressmaker come to the house and sew for me, and she was going to make me a dress from the silk, and after we had decided about the style of the dress I rolled up the goods (the silk was not folded as we fold it–it was rolled on a small stick of wood) and then I left it lying on the lounge, while the seamstress was fitting a lining to me, and when I went to put the silk back in the closet it had disappeared.

There was no one in the house but the dressmaker and myself. It was utterly impossible for the dressmaker to have taken it. We looked the house through several times and the whole family looked for it many times, but it was gone and we could not find it.

But six months later my husband had just returned from the Republican Convention that had nominated Blaine for President, and he was taking some things from his trunk that he had purchased for me, and I was just saying to him: “I have never found that silk,” when it dropped at our feet. It seemed to fall from the ceiling overhead. We both saw it fall. Now where was it all those six months it had disappeared?

Of course, apports—flowers, fruits, perfume, ice—falling as from the ceiling are a standard Spiritualist turn. Usually they are easily explained as in this story of a missing miniature:

[A]n equally extraordinary story was told to me by Mr. Farrar himself of an occurrence at his house with the Rev. Mr. Willis, of Coldwater, Michigan, who is also a very powerful medium. Mr. Willis, unnerved by previous occurrences at Mr. Farrar’s, would only remain for the night on the condition that Mr. Farrar would sleep in the room with him; during the night the same disturbances took place as described by Mr. Squire, and in the morning a small miniature, with a gold chain attached, was missing, and could nowhere be found. Mr. Willis left for his home without it, and it was only restored to him some weeks afterwards when he was again visiting Boston, when, whilst sitting with Mr. Farrar at his house, the latter assured me that the chain and miniature descended as it were from the ceiling of a lofty room without any visible agency, and he saw it deposited carefully around Mr. Willis’s neck. The Spiritual Magazine 1 January 1863: p. 26-7

Or as in this story, which suggests the use of a confederate or pre-planting of apports:

About an hour after this I was again impressed that was to come and sit with me and to put her chair two feet from the bed, on the side where I was lying; she was to cross her hands over her breast and not to speak. I then partly closed my eyes, but I could see that she sat motionless. In a few minutes I gave a faint scream, for I felt something had fallen upon me, appearing to come from the canopy of the bed or the ceiling; and upon the attendant coming in, which she immediately did on hearing me scream, there was my pillow and part of my bed covered with white camellias. A few days after this the spirits told Miss Nichol that her work was done; she was wanted at home and must leave me. My Experiences in Spiritualism, Mrs. C. Berry, 1872: p. 7-8

Poltergeist precipitants are not usually so pleasant, as in these two incidents surrounding Esther Cox of the Great Amherst Mystery:

To the amazement and consternation of all present, while they were talking and laughing about the ridiculous statement the girls had made, as having come from the voice of a ghost to Esther, all saw a lighted match fall from the ceiling to the bed, having come out of the air, which would certainly have set the bed-clothing on fire, had not Jennie put it out, instantly. During the next ten minutes, eight or ten lighted matches fell on the bed and about the room, out of the air, but were all extinguished before anything could be set on fire by them. In the course of the night the loud sounds commenced again. The Great Amherst Mystery, Walter Hubbell 1916: p. 56-57

One day, while scrubbing the hall at her new home, [Esther] was astonished to see her scrubbing brush disappear from her hand. When the ghost told her that he had taken it, she became thoroughly alarmed and immediately screamed at the top of her voice for Mrs. White, who, with her daughter, Mary, came running down stairs to her assistance, supposing she had fallen and injured herself.

When informed by Esther that the ghost had actually followed her to their home, their feelings can be better imagined than described. Mrs. White and Mary searched the hall and examined the water in the scrub-bucket, but all to no purpose; the brush could not be found. After they had abandoned their search, to the great astonishment of all, the brush fell from the ceiling, just grazing Esther’s head in its fall. The Great Amherst Mystery, Walter Hubbell 1916: p. 69-70

The dire Stratford poltergeist case, with its quick-change clothing effigies and violence against young Henry Phelps, also brought breezy communications from, among others, the Evil One fluttering down from the ceiling.

Letters, and lines written upon scraps of paper, have, it is said, been sent from the other world. The following was dropped from the ceiling of Mrs. Phelps’s parlor when she and others were present.

Diverting as they are, none of these incidents seem to shed any light on how the missing roll of Chinese silk came back.  If the facts are as stated, the silk must have been floating around the Super-Sargasso Sea for that six months. Let us hope it was color-fast.

Disappearing/reappearing objects are beginning to have a little more attention paid. There’s the 2016 book Disappearing Object Phenomenon: an Investigation and there is another upcoming title on the subject which I noted on Twitter but, (wait for it) can’t now locate….

I’ll turn my pockets inside out, but if you know without invoking St Anthony, contact chriswoodyard8 AT gmail.com

I was delighted to hear from Merrily Harpur, artist, cartoonist, and author of Mystery Big Cats, who shared this article by her brother Patrick Harpur on another case of falling fabric. Many thanks, Merrily!

And here’s my take on L’affaire des franges .