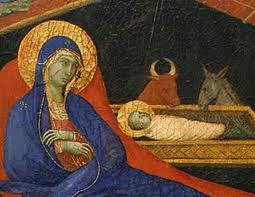 The Animals’ Christmas Carol: The Beasts Speak on Christmas Eve The ox and ass in a Duccio nativity.

It is said, in traditions ranging from the Mediterranean to Scandinavia, that animals are magically able to speak at midnight on Christmas Eve. It seems a charming anthropomorphization, like those nativity scenes showing the characters as puppies or cows.  You might look for innocent barnyard chatter about a Baby in a manger or a bright new Star in the East. And yet, in many parts of Europe, you would put your head under the covers for fear of what sinister things you might hear. Here are several stories from Southern Austria telling of the ill-luck that ensued when the animals’ conversations were overheard. I was particularly interested in the special shoes needed to understand animal-speech—they are reminiscent of fairy ointments applied to the eyes, which allow you to see fairies or the flesh of a white snake eaten to allow you to understand the speech of birds.

This will be the last post until 2012. I wish you all a very Merry Christmas and a happy, healthy, and prosperous New Year!

The Slav Christmas How the Holiday is Kept in Southern Austria

BELIEFS OF THE SEASON

The stories that are told about Christmas, particularly in the Gail Thal, a valley in Carinthia inhabited almost exclusively by Slavs, are most remarkable, and seem to have been hardly even colored by Christianity. The belief that horses and cattle talk in human language with each other on the night between the 24th and 25th of December is universal there. Whether the roes and chamois enjoy the same privilege or are subject to the same penalty seemed to be an open question, as few persons care to wade through the snow, to climb mountains, or even to take up their abode in a wood, in order to listen to their discourses. Even with respect to domestic animals everything has not hitherto been rendered as clear as we should like it to be. For example, a village priest was kind enough to furnish us with the following story, which was written down at once, as much as possible in his own words. It is a sin to listen to what the animals say, and it always brings ill luck. A farm servant from a distance did not believe the story—a sin which, it may be feared, was shared both by the present writer and his informant. Still he retained such a half belief as induced him to hide himself in the stable. The two horses which it contained talked to each other as follows: “We shall have hard work to do this day week.” “Yes, the servant is heavy.” “And the way to the churchyard is long and steep.” The man took to his bed and died. He was buried that day week. Here we have at least the Christian idea of a sin that is punished—a little too heavily, one is inclined to think—but what are we to say to the following story, which was told in the Slav dialect of Carniola by a traveling workman, at once translated into German and noted down. The story was read aloud in rough German, which was translated almost sentence by sentence to the narrator, who firmly believed in the truth of the tale, and corrected by him in one or two small points, which were directly altered. It is evidently a far older, or at least more authentic, version than the last:

HOW TO HEAR THE ANIMALS TALK

No one can hear the animals talk unless he has boots with nine soles and fern leaves in them. There was a farm servant (knecht) in the Gail Thal who had a pair of very strong shoes made, which were afterward frequently repaired, so that they had the requisite number of soles, though he did not know it. He lived in a loft above a stall where two oxen were kept, and between the loft and stall there was a trap door, which he often left open. One Christmas eve he went to visit a girl with whom he was in love in a village about a mile and a half away. The path led through a wood, in which there were a great number of ferns. He staid to long, and hastened back in such a hurry that he did not stop to fasten his boots, the laces of which had become loose. It is to be supposed that this was the reason why some fern leaves got into them. As soon as he had reached the loft he heard a great lamentation below, and called through the traphole to ask what was the matter. As no answer was given he put out his lantern, but remained standing. “What are you complaining about?” asked a voice below. “Why should I not complain,” answered a second voice, “when in six months I am to be slaughtered” “That is quite true, but I have a better reason to lament, for I shall be slaughtered in two days for a funeral feast, and you in six months for a marriage, which is better.” “Who will die, then?” “Our mistress.” “How?” “You know she has a cat that always sits beside her at meals and eats out of her plate. To-morrow there will be a great dinner, and the cat will come as usual, but she will be angry and push it roughly away. It will spring to the top of the stove; there it will stay for a time, but when the soup is brought in it will jump down upon the table, and from thence over the tureen and its mistress’ head. In doing this it will let a hair fall, and that hair will choke her.”

Here the conversation ended. Next morning the servant looked gloomy among his jovial fellows, and his master asked him what was the matter. For a long time he refused to reply, but at least he entreated his master to have the cat killed at once. It was no used telling a story that nobody would believe, he said, but his whole manner made such an impression on the proprietor that he consented to his request. The wife, however, said she was fond of the cat; it had been long in the house and if it were killed for a mere fancy she herself would go away. Everything, of course, happened exactly as the oxen had foretold. In six months the master married again, and said: “I don’t like to see that ox; it used to draw with one that was slaughtered at my first wife’s funeral. Have it killed for dinner.” One does not quite envy the wedding guests their beef. This was not, however, the moral the narrator drew from the story. He said: “One can see how much more cattle know than one thinks; if the servant had not happened to have fern leaves in his boot they would have spoken just as they did, and nobody would have known anything about it.” We for our part can only leave the story to those who are interested in such matters, in the hope that it will not prove as indigestible as the beef was likely to be. London Saturday Review.