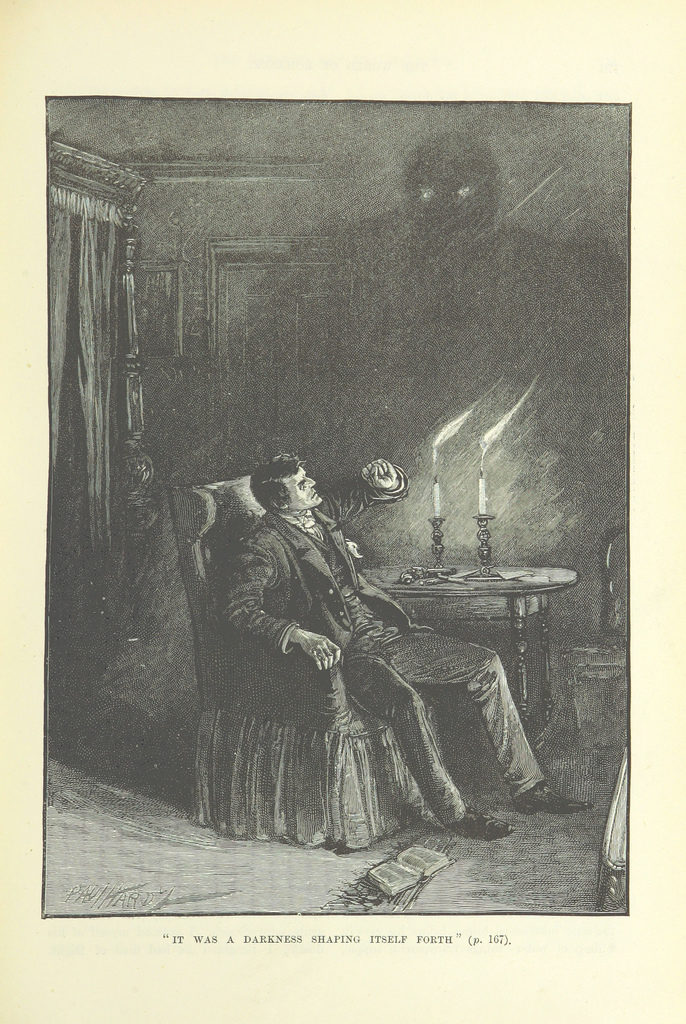 Because I’m one of those damned completists, recently I’ve been reading multiple variants of ghostly or paranormal stories and pondering how they get distorted or retold. First I collect various versions of the story as told by the newspapers, and then, if I’m lucky, I find the same events as related by the experiencers themselves. Sort of like Rashomon, but with fewer moving parts. You’ve seen an example in the tale of the Morris-dancing fairies, and in this story about a house haunted by an overwhelming odour of corruption.

Today, in part one of “The Black Ghost,” we look at a much-syndicated story of a sinister spirit at a house said to have been the site of a ghastly murder/suicide.

A startling ghost story is creating a sensation in England. Lord St. Audries claims he saw the ghost. English scientists, are taking his claim seriously, for he is a man of high standing. His father was “chief whip” of the Conservative party, also vice-chamberlain to Queen Victoria and King Edward.

Lord St. Audries encountered his “black ghost” in the traditional theatrical atmosphere. He didn’t believe in ghosts. But he was curious. So, on a week-end visit, he and his hosts decided to investigate a nearby haunted house. This haunted house was a, deserted dwelling, crumbling to decay, littered with fallen plaster and other rubbish.   The ghost’s headquarters were supposed to be in a second-floor bathroom where, some fifty years ago, an insane doctor had committed an atrocious murder and later committed suicide. Br-r-r-r!

Lord St. Audries mounted guard in the upstairs hall in sight of the bathroom door. He had a candle for light. His friends remained outside. (Most of us would.)

Here is Lord St. Audries’ report of what happened:

“Out of the door, down the dark passage, something rushed like an immense bat towards me. It was black from head to foot and it seemed to be built in the form of a very powerful man. But two things made me know that it was no human being. First I could see no face. Just a hideous blank. Secondly, though it came, with huge leaps over the rough, rickety floor, it made absolutely no noise.

“But when this thing dashed out I was struck backwards with an irresistible force. . . . I found myself fighting, struggling with I know not what, down the steep stairs.”

Having escaped, Lord St. Audries learns that no dog can be coaxed into the garden around the haunted house. This is the most significant part of his story. The Evening News [Harrisburg PA] 17 February 1923: p. 8

Brrrr, indeed. This story got a lot of play, first in the British, and then in the American press.  I’m not sure why a man would have his credibility enhanced by his father’s position as “‘chief whip’ of the Conservative party” or as “vice-chamberlain to Queen Victoria and King Edward,” but there is much I do not know about British politics.

FIGHT WITH A GHOST

(From a London Paper.)

A midnight adventure with a “ghost” in a desolate, dilapidated house” In Devonshire. is described by Lord St. Audries. Lord St. Audries visited the house with two friends, whom he refers to as Paul and Philip.

It was arranged that Paul and Philip should wait outside while Lord St. Audries crept into the house. Then: “I sat down at the bottom of the stairs–it was the only place to sit–and waited. There was absolute silence. Opposite me were the two Urge front rooms, and to the right of them a corridor on to which gave the small room from which I had felt all the evil Influences coming.

“Suddenly I felt that all was not well. Somebody, something was trying to make me go away. The air was charged with a hostile influence. I knew I was not wanted. And I knew that the force came from the little room with the open door down the corridor which I was watching.

“I leant forward and looked into the semi-darkness. As I looked I felt, as though it was a keen wind, this influence growing stronger and stronger, I summoned every effort of will power to rise to my feet.

“It happened. Out of the door, down the dark passage, something rushed like an immense bat towards me. It was black from head to foot and it seemed to be built in the form of a powerful man. But two things made me know that it was no human being that sprang; towards me. First, I could see no face. There was just a hideous blank that was all. And secondly, though it came with huge leaps over the rough, rubbled floor, it made no noise. There was absolute silence all the time.

“Now, I am not a small man. . . . But when this thing dashed out I was struck backwards with an irresistible force. And as I fell I felt a sensation of incredible evil, as though the forces of hell were conspiring against me. And with it something warm, not physically warm but with a psychic warmth that cloyed and enveloped.

“For a moment the whole world was blank, and then I found myself fighting, struggling with I know not what down the steep stairs. Who or what it was, if it was one or two or a dozen, I do not know. All that I know is that I saw nothing and that I just managed to fight my way outside, where I sank down on to the grass.”

The small room which was the center of the trouble was once a bath room in which some fifty years ago a particularly atrocious murder had been committed by a semi-insane doctor who had afterwards committed suicide.

Lord St. Audries is in the prime of young manhood–thirty-one years of age. He is the second baron bearing the title and the seventh baronet of his line. It is suggested the ghost may have been aroused to fight by the length of his name Sir Alexander Peregrine Fuller-Acland-Hood, Baron St. Audries.

It is a very satisfying “goose-flesher,” and most papers printed some serious version of it, except for the following:

ENGLAND HAS A BLACK GHOST

All England is talking about a ghost, as the English newspapers at hand today show to anybody’s satisfaction. Lord St. Audries is the chief witness. He was a guest at a week-end party and it was decided to investigate a reputed haunted house close-by. In the dead of night, so St. Audries said, as he came to the top of a steep staircase in the place, a black, faceless creature or something, with a rush of wind dashed him aside and hurried past him, while the nobleman nearly fell down the stairs.

This is exceedingly interesting and should be especially so to Sir Arthur Conan Doyle and the Psychic Society of Great Britain. Lord St. Audries is quite circumstantial in his narrative and declares that there was a formless void in the ghost where a face should have been. He shudders every time he thinks about it. He only noticed that the spirit was black all over, and seemed to have the form of a very powerful man.

This is a much better ghost than many others on which the Psychic Society has been called to report. Nearly every one of these latter spooks has been described, as all those of tradition have been, as at least wearing mouldy grave-clothes to cover the bones of the wraith. Some have worn cocked hats and some have had shawls and sunbonnets. But the new black ghost of Lord St. Audries apparently had no clothes at all, so far as anyone could notice.

And this comes nearer the possibility of a logical spook than any of the others, because, as the late Ambrose Bierce once pointed out, one can conceive of the possibility of an uneasy soul trapsying [sic] around o’ nights in a misty resemblance to its former body, but by what stretch of imagination can one conceive of a ghost of a hat and a suit of clothes.

It is worth noting that, although many of the versions of “The Black Ghost” that appeared in both the American and the British press mentioned the “insane” (or, mystifyingly “semi-insane”) murderous doctor, that part of the story had its origins in a seance held in the tainted house attended by psychic and Theosophist Violet Tweedale many years before Lord St. Audries met the Black Ghost. More on that subject in part 2, where we’ll hear from several eye-witnesses.