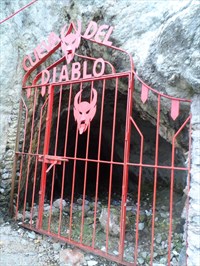 The Devil and the Cave of Gold The Devil’s Cave, Mazatlan, Mexico. http://www.waymarking.com

While in the throes of The Victorian Book of the Dead, I have lingered too long amongst the demon barbers who rip off decomposing faces while shaving the long-departed; the exploding caskets, the angry dead, and the maggot-infested floaters from the Ohio River collected by professional corpse-fishers. So about now I’m in the mood for a darn good Ripping Yarn without any Death in it.

Settle into your fireside armchair, refresh your glass of whiskey, and light your pipe while I gaze into the fire meditatively and share the thrilling tale of “The Devil and the Cave of Gold.”

William J. Howard, who lived five years on Martinique Island, has returned to his home here, and tells a story of Mount Pelee that is more wonderful than the fact that it has been in eruption for some time [May 1902] and has killed thousands of people. Howard says he was guided to a cave in Mount Pelee three years ago by a native of the island, and that he saw tons and tons of gold in the cave.

“And that is not all,” added Howard. “I saw the Evil One in that cave, if there is a devil anywhere in the universe of worlds. I am not superstitious, I have no belief in any kind of religions, and I never believed until that time that there was a Satan, but I saw something in that cavern that would shake any man’s fixed ideas about such things. It is almost beyond belief, I will admit, but it is all a fact.”

“After I had been there a year or two I met a man known by the name of Jaques [sic], who claimed to be a native of Martinique, but whom I always believed to have come from some other place. He was a creole, but I do not think he was born on the island. He was too active. He spoke the French language, and not a word of English. One night he told me about a cave on the far side of Mt. Pelee, and said the devil lived there.

“Then I intimated to Jaques that he was lying to me, and he said he would take me to the cave. I set a time for the visit to the mysterious place, and fixed it so that we would arrive there in the night, but Jaques would not go. He would only go in daylight, so we arranged to start before daylight one morning.

“True to his word he showed me a rock which proved to be the entrance, then he turned and fled, while I started to explore the cavern.

“I kept on going, passing through cavern after cavern, until I came to one that was about 800 feet square. I had no light, but I could see everything in the cave. It was a beautiful place, and I stood looking at it a long time before I noticed the heap of what I at first supposed to be rocks in the center.

“I examined this heap, and found that it was gold—gold in lumps as large as a boulder, and in smaller lumps the size of a peck measure. There was ton upon ton of it—more gold than has been seen in all the world before. I tried to lift one of the smaller nuggets, but it was too heavy. I scraped it with my knife, to be sure that it was really gold.

“It was such a stupendous pile of gold that I was awed and not in the least excited. As I stood there I saw a blue and green flame at one side of the cave, and then I noticed a man—or what I at first supposed to be a man—standing there. I took a good look at this being, and at that time I believed that I was looking at the Evil One.

Had Horns and Hoofs.

“The face was covered with black hair, coming to a point at the chin, like a beard. The eyes were very much like those of a human, but the short horns growing from the top of the forehead dispelled the idea at once that it was a human face. The limbs were long and the nails were like claws.

“It was a glistening body that I looked upon. I was pushed into a corner of the cave, and the being beside me manipulated something at his side that turned on a stream of light or flame, which shot across the cave.

“This stream appeared to have no substance, but it was 10,000 times as hot as any fire on earth, it seemed to me. It was more like a searchlight, and about the size of a stream from a street hydrant. He turned it upon the heap of gold, and the bowlders of yellow metal were melted like tallow in a hot fire. I saw the yellow metal run on the bottom of the cave. I could not breathe the stifling air, and fell down unconsciousness.

“When I regained consciousness, there was the same dim light in the cave I had seen when I first entered. The heap of gold was still there, and the melted gold was on the floor of the cave. After groping around several hours I found the opening and left the place, more dead than alive. I did not bring away any of the gold, except the few shavings that I found in my knife, but they were enough to convince me that I had not been dreaming, and that it was actually gold that I had seen. I had no proof of anything else I had seen in the cave except my recollection. When I left the cave I pushed the rock back in its place, and finally reached St. Pierre again. I either saw all the things I have told you about or my brain was so disordered that I thought I saw them, and I have never been accused of being insane.

“Although I had no fear while I was in the cave, a sort of terror seized me after I was safe outside, and I suffered from it so much that I was thrown into a fever, from which I lay ill several months. I never went back to the cave again, and had no desire to get possession of any of the gold there. I left Martinique as soon as I could get away and I never intend to return.

On wet afternoons, I like pretending that stories like this are serious accounts and trying to account for their details in a logical manner. The best yarns always contain a bowlder of plausible details.

Is there actually gold on Martinique? (Probably not, although it was the repository for 286 tons of gold from the Bank of France during the Second World War. Oooh, prophetic!)  Was this story a “touch” for an unusually creative con-man? Visions of gold, the Evil One, and His Satanic Majesty’s Thermal Death Ray Machine could (one doesn’t like to be dogmatic and say “must”) be hallucinations. Inhaling mephitic fumes from the volcano may not have caused insanity (I like how that is the only option to the truth given by the author; rather like forcing a card.), but the Priestess at Delphi could have compared notes about uncanny visions with the author. That blue and green flame might have come from a fumarole. Mount Pelee was active long before the terrible eruptions of 1902. To quote Wikipedia:

“as early as the summer of 1900, signs of increased fumarole activity were present in the Étang Sec (Dry Pond) crater near the summit.Relatively minor phreatic (steam) eruptions that occurred in 1792 and 1851 were evidence that the volcano was active and potentially dangerous. Local natives, the Carib people, knew it as “fire mountain” from previous eruptions in ancient times.”

Volcanic caves can contain poisonous gases, of course: hydrogen sulfide, carbon monoxide, and methane are among the dangers. But it seems unlikely anyone passing out would be able to recover and crawl out of the cave. Remember those stories from the Grotta del Cane. Or perhaps the author was already sickening with fever and having walking febrile dreams.

I can’t find any information about a William J. Howard, at least as an author. One of the newspaper versions says that he is a “miner, who is at present residing at St. Joseph, Mo.” But it sounds like a plausible mining-engineer-turned-travel-writer kind of name, doesn’t it? Familiar to us all…. I have a theory that when a narrative casually tosses off a name we are supposed to know, it is a signal that a yarn is impending. And sometimes a good yarn is all one needs to forget about the many appalling ways there were to die in the nineteenth century.

Now, if you’ll excuse me, I have some books of forbidden lore to consult. I’ll bid you all a good night. The butler will show you to the bed-chamber reputed to be haunted where you will be found in the morning, a corpse, with a look of stark, staring horror on your face.  Pleasant dreams.

Any further information about “William J. Howard,” or gold on Martinique? Send with a few shavings for scientific analysis to Chriswoodyard8 AT gmail.com.