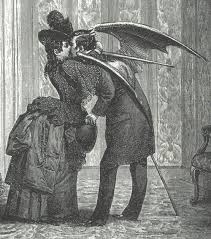 Hell prevailing against her.

The Devil Went Down to Craigslist

Evil can be very seductive. For some aficionados, Satan is the ultimate bad-boy-date-from-Hell.  Now, I lead a sheltered life; my ignorance compounded by a reluctance to access sites advertising “666 porn,” even in the interests of research. Yet, given a nodding acquaintance with witch “confessional” literature, Crowley, LaVey, and the French Diabolists, I should not have been surprised to learn that there is such a thing as a Satan fetish—that there are people who find the idea of sex with the devil titillating (“carelessly evil, dark and controlling:” read one person’s online description of her dream date, Lucifer).  But, sadly for her husband, Mrs. Andrew Blaes of the Chicago suburb of Glenview, was not one of them.

In this domestic tragedy, the curtain first went up on a scene from a comic opera:

Chicago, Sept. 8. A dress rehearsal of Goethe’s “Faust” in the slumbering village of Golf, a suburb is responsible for the bill of divorce filed yesterday by Rosamond Blaes. She charges that her husband, Andrew Blaes, after burning incense and filling the air with weird noises, appeared before her in a flaming red robe, horns, hoofs, a spiked tail and armed with a pitchfork.

Thundering “Appear” at the top of his voice, his wife says that Blaes chased her through the village bawling the pet phrase of Goethe and tearing her clothes at every leap. [shades of Spring-heeled Jack!] She was at last rescued by neighbors, and since then, has lived with her son Andrew.

Another phase of the family feud said to be the result of occult practices of Blaes, is a $10,000 suit filed yesterday by Gertrude N. [M.] Blaes against the mother, charging that she uttered slanderous statements regarding relations existing between husband and daughter. Grand Forks [ND] Herald 9 September 1909: p. 5

The papers went mad for the story. One headline read:

This story gives even more intimate details about this couple’s marital troubles:

Wife, Who Seeks Divorce, Says He Burned Red Fire and Pursued Her in Her Night Gown.

Chicago, Sept. 15. Dressing a robe of flaming red, with black trimmings, to represent himself as the Prince of the Region of Brimstone and Sulphur, burning incense and making weird noises to frighten his wife, were acts ascribed to Andrew Blaes in a bill for divorce filed today by Mrs. Blaes. The husband owns $100,000 worth of property and lives at the Glenview Golf club.

While Mrs. Blaes and her husband have lived in the same house nine years, it is asserted that they have occupied separate apartments.

“About eight or nine years ago,” says Mrs. Blaes in her bill, “my husband took up the study of hypnotism and occultism and has conducted many experiments in our home. Frequently he has burned incense and the odor has permeated my room and sickened me. The more I complained the more was burned.

“On one occasion recently he dressed up in flaming red with some black trimmings to represent the devil. This was done late at night after we had all gone to bed.

“Then he made weird and uncanny noises in the kitchen. I was ill in bed, but got up to investigate. The sight of my husband dressed in this queer garb frightened me, and I ran out of the house, clad only in my night robe. He followed me, making unearthly noises.

‘At each step he would catch hold of my garment and rip out a piece. When I finally felt exhausted and hysterical in a neighbor’s house, I was almost nude.” Spokane [WA] Press 15 September 1909: p. 4

“Besides masquerading as the devil, Mrs. Blaes says her husband once erected a throne in her bedroom and made her bow down and worship him. At the time this ceremony was in progress, Mrs. Blaes asserts her husband burned red fire in the room and screeched like a fiend.” St. Landry [LA] Clarion 18 September 1909: p. 5

Other articles added that Andrew Blaise studied hypnotism “until he imagined he was the Chicago ambassador of his satanic majesty, and that he designed a carmine, spiked and horned costume…” [Trenton [NJ] Evening Times 9 September 1909: p. 14]

“Mrs Blaes alleges that while her husband was playing devil he sought to invent a new kind of incense and that when he would get a new combination he would burn it out in the kitchen to see how it smelled. According to Mrs. Blaes some of the smells permeated every part of the house and the more she complained the more horrible smells he concocted so that she was forced to go and live with her son.

The petition states that they were married in September 1878, that they have separated several times and that even while they lived together, have occupied separate rooms. The final separation was in July 1909.” [Chicago Daily Tribune 8 September 1909: p. 5]

Nothing like the seductive scent of brimstone to win back the affections of an estranged wife.

I found a squib from 1895 about one of the divorce proceedings reading in part “The charges are very sensational. She asks for the custody of the two children and $10,000 alimony.” [Logansport [IN] Reporter 6 March 1895: p. 4] Were those sensational charges the same as those that regaled readers in 1909? Perhaps not.

As I was looking at variants on this story, I ran across the following article. I read it, carelessly, then noticed the date: 1902—seven years before the divorce petition.  If this story is accurate, Andrew Blaes had been gaslighting his wife for years before she realized that her tormentor was not the Prince of Darkness, but her own husband.

Mrs. Andrew Blaes and her Daughter Dash Across Frozen Prairie at Glenview While Husband Sleeps in Peace

Believing their house haunted by something more terrible than the bogy man, Mrs. Andrew Blaes, of Glenview, and her 18-year-old daughter have deserted it for a neighbor’s. Clad in night apparel they fled across the cold prairie, firmly convinced that the suave Mephisto himself had taken possession of their home and was scourging them from it.

The fright given them by the grim pursuer, as they saw him, left Mrs. Blaes prostrated on the doorsteps of Thomas Shipman’s house, while her daughter, with chattering teeth, pounded at the door and screamed for assistance. All the time the wild race was being run, Andrew Blaes, student of the occult, seer of strange sights and believer in necromancy, slept peacefully in his home and knew not that his wife and daughter had fled from the house.

For hours Mrs. Blaes was prostrated, but her daughter rallied and was able to tell her neighbors a wonderful story of the coming of the devil. For some time Miss Blaes said her mother had complained of hearing unusual noises in the house. On the night in question the mother became possessed of the hallucination that the devil was in her room. Scream after scream pierced the air, awakening the daughter and terrifying her.

Without pausing to investigate, both women rushed from the house. Since then Mrs. Blaes has been under the care of Dr. Joseph Sanders.

Andrew Blaes, the husband, said the spirits had not awakened him, and laughed at the idea. Chicago Tribune. New Orleans [LA] Item 26 January 1902: p. 3

No, the spirits didn’t disturb him.

What role did daughter Gertrude play in this scenario? There was that lawsuit about what the paper seemed to hint was an unnaturally close relationship with her father.  The phrase “the mother possessed of the hallucination that the devil was in her room,” suggests that Gertrude, startled as she was by the screams, thought her mother was crazy. Or was the daughter in on the devilish deception?

Gertrude did seem to be something of a Daddy’s girl. She apparently never married and by 1937 had gotten power of attorney over Blaes’ financial affairs. In 1937, Blaes was fined for violating the thistle law of Illinois when he refused to cut the weeds on his Wheeling Township farm.

“Miss Gertrude Blaes, daughter of Andrew Blaes, refused to allow them to see the owner of the farm because she had his ‘power of attorney.’…At the trial Blaes appeared to be in ignorance of the notices or the reason for his trial. His daughter evidently had managed his farm without consulting him.” [The Daily Herald [Chicago IL] 27 August 1937: p. 18]

I wish we had more details on Blaes’s occult studies and those “strange sights”—did he take a correspondence course? Serious occultists would probably say that red tights and pitchforks are not part of any  working. Blaes seems to have thought only of working up to a hot time in the boudoir. And of terrifying his wife.

I’ve been unable to find death information for Andrew or Rosamond or whether they actually ever divorced. Given Blaes’s wooly-headedness about the thistle issue and his daughter’s POA, one wonders if his Devil-fetish was part of some early-onset dementia, one symptom of which is inappropriate sexual behavior. Or perhaps he was just an Imp of the Perverse.

If you have further information on this marriage from Hell, don the red tights and tail and APPEAR to chriswoodyard8 AT gmail.com

UPDATE: Undine, of Strange Company (http://strangeco.blogspot.com/) tells me that Andrew Blaes died in 1939–still married to Rosamond. Many thanks, Undine!