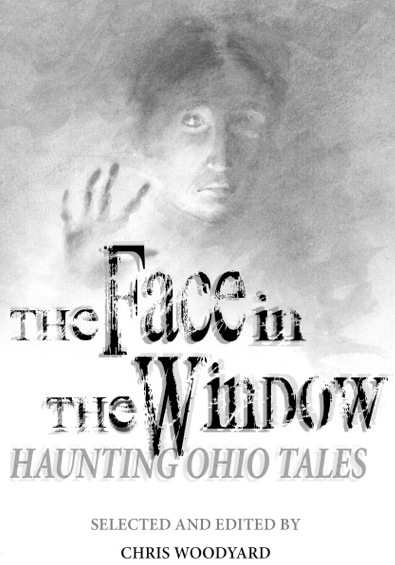 The Faces in the Window

My book, The Face in the Window: Haunting Ohio Tales includes a chapter titled “The Faces in the Window: Strange Images in the Glass.” Beginning in 1871 there are reports of faces appearing mysteriously in window glass in Ohio and elsewhere. They all seem to share certain characteristics: the faces are not sharply defined, cannot be seen by all viewers, and cannot be seen from the inside of the window. Strangely, no memory of this event survives (even in local legend) in Sandusky and Milan, where the faces first appeared.

Examples included a young lady from New Orleans whose portrait appeared in the window of a Sandusky hotel where she had spent the summer, a “fancy woman” of Portsmouth named Mollie Sullivan (or Stuart, which was the name of her pimp) whose picture appeared on the window of her Fourth Street home, and an assortment of subjects: old men, cats, George Washington, and horses in window glass around Sandusky and Milan.

Charles Fort in his book Wild Talents discusses historic tales of images—crosses and death’s heads—appearing in 1872 on window glass in Europe during the Franco-Prussian War and mentions reports of faces from Massachusetts, Milan, Sandusky, and Cincinnati. Fort suggests that the origin of these stories lies in the rise of spirit photography and wonders if the human imagination can affect a photographic plate, or, by extension, window glass.

In reporting on the faces, the New York Times was scathing about the credulous yokels of the Heartland:

In many of our Southern and Western States life is made pleasant by other conditions than those which prevail in our commonplace sea-board cities. Something of the freshness and simple faith of an earlier age still lingers in these localities, and one is not constantly shocked by the scoffing unbelief of communities which claim for themselves higher civilization…the one point on which the remote rural districts are stringent is in the matter of spectral apparitions. The number of well-authenticated ghosts that have from time to time of late appeared in different parts of the country is quite encouraging to lovers of the marvelous.” The New York Times 30 April 1871: p. 4

Despite the ridicule, the Times covered the faces-in-the-windows stories extensively in a series of articles:

Scarcely in the memory of man have earthquakes been more general, tornados more frequent or more fierce, or floods more destructive. Never at any time have we had more wonderful seers prophesying evil to come. And, to complete our uneasiness, those unaccountable faces, which we had fondly hoped were indigenous to the window-panes of Milan, appear to be spreading themselves over the entire State of Ohio, and bid fair to convert every street in the country into a spectral art gallery.
Mr. E. W. Alexander writes to the Sandusky Register that on one window of a single saw-mill in North Fairfield, Huron County, Ohio, he has discovered no less than twelve of these pictures, representing every variety of sex, species, and condition of life. There are ancient philosophers and pretty women, there are horses and cats, and, as in Milan, there are many portraits of Washington in his old age. It is evident, therefore, that these ghostly photographers are at least patriotic, and that is some comfort.” The New York Times 10 May 1871

E.W. Alexander was a well-educated and eccentric character known as “The Sage of West Huron.” He was a teacher, newspaper correspondent, “prophet,” and phrenologist. Many of the persons mentioned in these reports are associated with “fringe” movements. Few journalists took the images in the windows at all seriously, ridiculing witnesses as deluded crackpots or Spiritualists.

My friend Alexis has suggested a prosaic, if dampening explanation for the faces in the windows. Photographic studios often sold off old glass plates in bulk to greenhouses or glaziers. Some Daguerreotype plates were the ideal size for window panes and might still bear a faint image. Could a glazier in the Milan/Sandusky area have had a large stock of these used glass photographic plates and had been installing them as window glass? One would think that the images would have been visible from the start, but perhaps something in the atmosphere or the weather “developed” the images, especially when viewed from an angle that allowed sunlight to reflect off the remaining silver. This might explain why viewers inside houses did not see the faint images, which were only visible at an oblique angle, such as from street level, looking upwards.

Another friend, the late Nick Reiter of the Avalon Foundation, made the following comments: “I realized a serious commonality to ALL of the accounts – the window faces are visible only from the outside. What this tells me is that the phenomenon is essentially and entirely dependent on the optical property of reflection, not transmission. IOW, whether on the inside or outside of the glass, whatever modulates or patterns the image is a surface effect. My hunch is that it may have been in some cases a slight etching of the out-door facing surface of the pane. Glass in those days – pre”float” – was a different formulation than modern soda-lime glass. It was softer, more chemically reactive. More easily etched by rain – even in decades long before acid rain.”

I, too, wondered if there could have been a weather/volcanic event that might have acidified rain enough to etch glass, which was then interpreted in various pictorial ways.

Here is yet another report I recently discovered, with a curious detail about the image only being visible when installed in the window:

A Queer Story.
The Conneaut Citizen gives the following account of a phenomenon (or a trick) now visible on a pane of glass at Ashtabula, Ohio:
One of the most singular occurrences we have head of is the profile of a man upon a window pane on the north side of a house at Ashtabula Harbor, occupied at present by Mr. Charles Lynn. D.B. Geary visited the place on Thursday, for the purpose of gratifying his curiosity, and reports as follows: The outlines of this strange picture were first noticed some six weeks ago, gradually being developed, until on the occasion of his visit, the profile was perfect, and the expression of the eye particularly sharp and clear. Mr. Geary states that while looking at it there seemed to be no escape from the stare: get in what position you will, the eye seems to rest upon you with piercing sharpness.
The profile represents a man of middle age, very heavy, full beard, with turn-down collar. Some days ago Mr. Lynn sold the sash containing this profile to a gentleman for the sum of $25. Upon being removed from its position in the house no trace of the strange picture could be seen, but upon being replaced it was as plain to the eye as before. This marvel is attracting people by hundreds, the road to and from the house being constantly thronged with visitors, anxious to witness the sight. Hon. B.F. Wade and lady are among those who visited the place. Mr. Geary states that all attempts to wash it off have been without the least effect, although the strongest acids have been applied.
Macon [GA] Weekly Telegraph 8 August 1871: p. 1

The window pictures were sometimes whitewashed or smashed because the owners did not want crowds flocking to their doors. I have not found evidence that any panes survived and it is doubtful, that, separated from their provenance, they would be recognized as anything unusual. At this distance in time, we have no way to determine the origins of the mystic portraits–whether daguerreotypes, “spirit pictures” or simulacra–that caused such a sensation in 1870s Ohio. As is often the way with paranormal images: “the negative has been lost.”