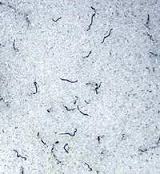 Oh, the weather outside is frightful, so naturally I’m finding stories of Things Frozen in Ice delightful.  This monster story is such a sparkling example of 19th-century journalistic invention and hyperbole, that it deserves to be cut into cubes and served in drinks with tiny umbrellas.

First View on Record of the Hideous Ice Worm.

Astonishing Phenomena Seen by the Gang of Cutters.

Marlboro, Mass., Dec. 24. The sea serpent has a worthy rival.

The city has a unique Christmas present that makes its escape.

For several days men have been cutting ice on Lake Williams, and good ice it is, too. Yesterday there was a great commotion on and about the lake. Horses ran away, heavy blocks of ice melted in a twinkling, sturdy, rugged men fainted, while three were nearly drowned. The handles of tools were burned almost in a moment, ice hooks and other iron tools became moulten in a surprisingly short time, and such scenes were witnessed as never have been thought or dreamed of in connection with Arabian Nights or Grecian mythology.

The workmen had for several hours been labouring industriously, with no thought of the severe fright they soon were to undergo. The first event of a phenomenal nature noticed was when the lake water began to grow warm. Then it increased in calorific intensity until it was at a boiling point and so vast was the amount of steam that it caused a first and second alarm of fire that brought out the entire fire department, but so dense was the vapour that the firemen could not come over French Hill. The ice was fast breaking up and melting away, and a good part of the lake was boiling.

In order that all the facts in connection with this strange phenomenon be not lost sight of, it should here be stated that those who had been at work on the pond had crawled up the hill to the reservoir to sit on the ice there, to cool off, and awaited further developments with palpitating hearts and bleached faces.

Soon the air was filled with a salty savor, the steam and heat subsided, and then there shot into the air a stream of unmistakeably salt water. It furnished a most blissful reminder of last summer’s vacation to those who visited the sea shore.

Next there was a seething, hissing sound, huge quantities of mud were flung high skyward, which was followed by a sound, which, as nearly as it can be described, was a cross between the trumpeting of a mastodon, the screech of a locomotive giving the danger signal and the premium work of a Fourth of July fish horn.

This was supplemented by the appearance of the

That the eye of man ever beheld. In length it was about 70 feet. It had scales about a foot square, very symmetrical in form, lapping each other about a quarter of an inch and shining as brightly as the steel trousers that Margaret Mather wears in her character of the maid of Orleans.

Compared to it the sea serpent owned by the Sea Serpent Club, and annually seen at Marblehead is the paragon of all that is beautiful. Its head was wide as a board, and as flat as some speeches in Congress. Its teeth were about eight inches long, round and were as sparkling as a well-washed lager beer bottle. When it distended its jaws there was the sign visible, “Looking for a job in a dime museum.”
Its tail was like that of a whale, only it was put on the other way. It was sharp and so flexible that this monster could use it with which to pick its teeth.

The nondescript had three eyes, one in the centre, and they bulged forth from the head to such an extent that they looked like three massive pins to a hat tree, upon which to hang coats. This never-before-seen had eight legs for walking, which were just long enough to reach from his body, which was round as a common sized hole, to the ground.

There were noticed upon its sides four wing-like protuberances, but no pin or tail feathers were discovered.

This strange and unbidden visitor emitted from its body so much heat that the adjacent hills, which were covered with snow and ice, had a rich brown crust baked over them, the crust thick enough to bear up one of Senator Blair’s ponderous humorisms. So oppressively hot was it that persons in and about the city were out sleigh-riding in their shirt sleeves, if they had any. The molasses in the grocery store became so thin that it lost all its thickness, and the varnish flowed on the stowed-away carriages in the livery stables. It was hot enough to take the chill off of the junior senator of the State.

This half-fish, half-beast, with another half not yet determined, uttered sounds ranging from crescendo to diminuendo and half-way back again. It gazed through the valley and then took a bee line for Westboro. Its sharp

Tail Was Trimmed with Teeth

Like those of a cross-cut saw. In its progress over the ice it cut the same into regulation size cakes to repay the men for their time lost because of their trepidation. It half flew and a quarter waltzed across the lake’s snow-white bosom.

Lest there should be discovered any inaccuracy in the narrative it should be stated that the “great unknown” cooled off before it began cutting, so that where it was at work the ice remained intact.

This monstrosity was followed in a balloon by a few adventuresome reporters of the local papers who saw it go upon Lake Cahucy in Westboro, and tie itself into a four-in-hand knot upon the ice there. It was discerned by some of the inmates of the insane asylum on an adjacent hill, who were heard to remark that the ghost of Sitting Bull was making a tour through the Indian settlements, and had just come from Mashpee, but this supposition is burdened with the weight of doubt.

The fiendish looking object roasted for a while, then generated heat enough to dissolve more ice, got into the lake, drank it up, found a hole, slipped into it, ate the hole and was lost to sight, though not to memory dear.

The paramount question in the city today is:
“Where did it come from?” This is asked by those who saw it with a well-baited breath. That part of Lake Williams where this hideous child of nature made its appearance

This has been verified by blind experts, and it has always been believed that because of that fact this lake is an outlet of the China sea, hence the volume of salt water that preceded the advent of the stranger, which by some is said to be a Chinese god on its annual vacation.

A number of well-known scientists have just held a session and have decided that this being an inland city it has no chance to get a glimpse of any of the numerous family of sea serpents, but that this being the baby city of the Commonwealth, it has been permitted to witness for the first time the fearful and devastating active partner of the brokers in congealed water—the much abused ice worm, which it was never permitted man to behold. The ice worm will be called upon the coming summer to McKinley prices, as its partner “scarcity” cannot be depended upon during the coming torrid period.

The life-saving crew was called up from Hardiman’s brook to rescue those human ice cutters who sat on the ice in the reservoir to watch from afar off. They forgot to keep moving, thus the several basements of their respective trousers clung tenaciously to the glassy surface of that reservoir. They were pulled off with ice hooks—the men were.

Margaret Mather was a pretty Canadian actress with a gift for self-promotion and less of a gift for acting. Her Joan of Arc crashed and burned. Senator Henry Blair, of New Hampshire, was well-known as a wit and raconteur. To “McKinley” a price was to lower it, as prices for American goods fell after tariffs were passed. The Sea Serpent Club, founded by a Marblehead man, was an association of newspaper men and lawyers who gathered for convivial dinners and then “spotted” the sea serpent offshore.

My question with stories like this is, did anyone take them seriously and, in this case, go out to Lake Williams to view the carnage? It seems unlikely, given the extravagance of the language, but one never knows…  Thoughts? Chriswoodyard8 AT gmail.com