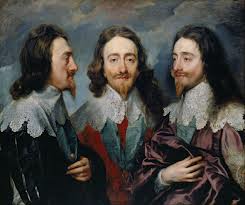 Sad Stories of the Death of Kings The van Dyck triple portrait of Charles I from which Bernini created his bust.

Today is the anniversary of the execution of King Charles I of England [1600-1649].  Seventeenth-century England was a kingdom much atuned to the significance of tokens of death, apparitions, and other omens. It was treason to predict the death of the King, so stories like those below would have been whispered, rather than published abroad.  A much later chronicler of the paranormal gives examples of dire portents of this unhappy event said to have been reported during the King’s life.

An anecdote, which was current during the reign of King Charles I., and has the support both of Archbishop Laud and Lord Clarendon, is said to have thrown a sad gloom over the spirits of the royal friends, already saddened by the fearful pestilence which inaugurated his reign. At the coronation it was found that there was not in the whole of London, nor indeed in the whole of England, sufficient purple velvet with which to make the customary royal robes and the corresponding furniture of the chair of state and throne. What was to be done? Rigid custom, coming down no doubt for long generations, possibly from the time of S. Edward, required that old traditions should “be scrupulously observed and carefully followed. What was needed could not in all probability be had nearer than Genoa. To obtain it would have caused a delay of several months: and it was agreed that the solemn anointing and coronation could not be properly postponed. So it was resolved to robe His Majesty in white velvet, from which he was known afterwards as “the White King.” But this was the colour in which victims were arrayed. So many persons maintained that the Council which had sanctioned such an innovation had unwittingly, perhaps, but efficiently established an agency of evil; and many more after the King’s martyrdom recalled the ominous change.

Another Warning, or supposed Warning, of approaching evil vouchsafed to the King was equally striking and peculiar. It happened a short time before the disastrous Battle of Newbury, and is thus recorded:—

The King being at Oxford, went one day to see the Public Library, where he was shown amongst other books, a Virgil, nobly printed and exquisitely bound. The Lord Falkland, to divert the King, would have his Majesty make a trial of his fortune by the Sortes Virgilianae, which everybody knows was not an unusual kind of augury some ages past. Whereupon the King opening the book, the period which happened to come up was part of Dido’s imprecation against .Aeneas, which Mr. Dryden translated thus:—

“Yet let a race untamed, and haughty foes,
His peaceful entrance with dire arms oppose;
Oppress’d with numbers in th’ unequal field,
His men discouraged and himself expelled,
Let him for succour sue from place to place,
Torn from his subjects and his son’s embrace;
First let him see his friends in battle slain,
And then untimely fate lament in vain;
And when at length the cruel war shall cease,
On hard conditions may he buy his peace;
Nor let him then enjoy supreme command,
But fall untimely by some hostile hand,
And lie unburied on the barren sand.”

It is said that King Charles seemed concerned at this accident, and that Lord Falkland observing it, would likewise try his fortune in the same manner, hoping he might fall upon some passage that could have no relation to his case, and thereby divert the King’s thoughts from any impression the other might have upon him. But the place that Falkland stumbled upon was yet more suited to his destiny than the other had been to the King’s; being the following expressions of Evander upon the untimely death of his son Pallas, as they are translated by the same hand:

“O Pallas! thou hast fail’d thy plighted word,
To fight with caution, not to tempt the sword;
I warn’d thee but in vain ; for well I knew
What perils youthful ardour would pursue,
That boiling blood would carry thee too far,
Young as thou wert in dangers—raw in war!
O cursed essay in arms—disastrous doom,
Prelude of bloody fields and fights to come.

Again, as regards the King’s bust, the following record was current and commonly discussed:—

“Vandyke, having painted the King’s head, in three different attitudes, a profile, a three-quarters, and a full face, the picture was sent to Rome for Bernini, the celebrated sculptor, to make a bust from it. This artist, being exceedingly dilatory over his work, and having had complaints made to him on the subject, said that there was something so unusually sad and melancholy in the royal features, that if any stress might be laid on physiognomy, he was sure that the person whom the picture represented was destined for a violent end. When the bust arrived in England, the King being anxious to see it, it was taken immediately to Chelsea and placed on a table in the garden, whither the King, attended by many, went to inspect it. While so doing a hawk, with a wounded and bleeding partridge in its talons, flew over the King’s head, and some of the blood fell upon the marble neck of the bust, where it remained without being wiped off. The omen is said to have been marked by many.”

On the day of the King’s burial, when the coffin was borne to S. George’s Chapel, Windsor, by tried and trusted subjects and servants, it was carried through a severe snow-storm, and the purple pall was covered with the whitest snow, thus adding a fresh reason for the title by which His Majesty had been known.

This site: http://anglicanhistory.org/charles/skcm_pamphlet.html,  on the cult of King Charles the Martyr, says that the King was called The White King because he wore a long shirt of white at his coronation–symbolic of the robe of martyrdom.

I’ve been rummaging in my files trying to find a story of another portent that supposedly took place in Charles’ nursery,  where a mysterious veil was seen to cover his cradle. Ah, found it! Other sad stories of the death of kings? Chriswoodyard8 AT gmail.com.