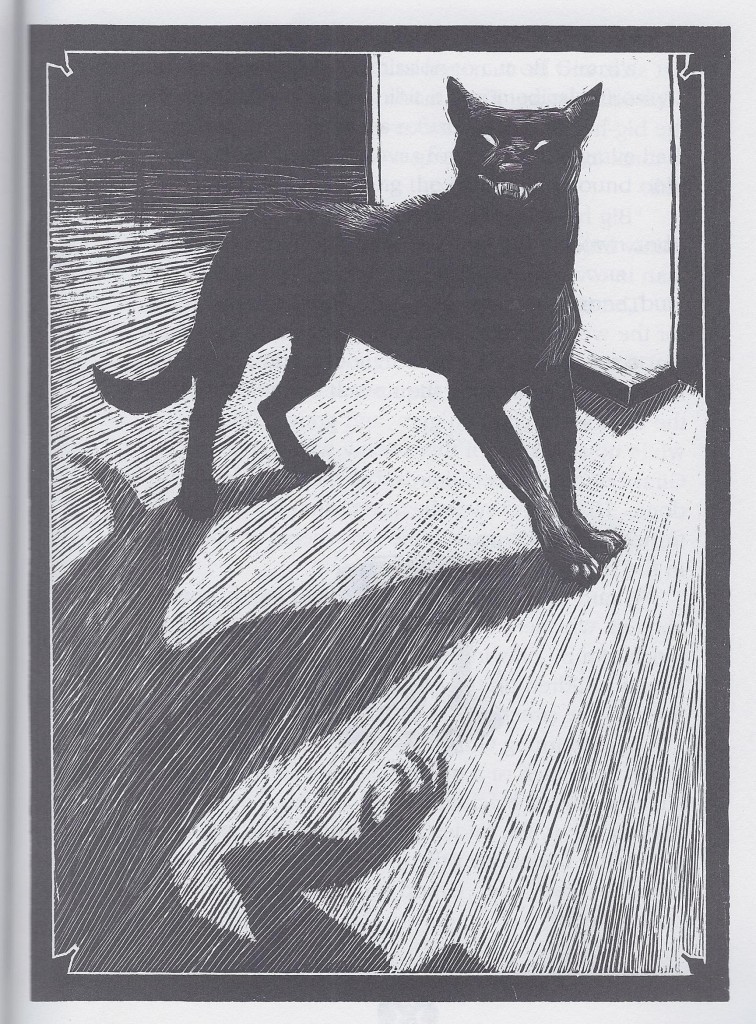 “Mr Holmes, they were the footprints of a giant hound…”

Most of us know the fictional Hound of the Baskervilles, so memorably brought to slavering, phosphorescent life by Sir Arthur Conan Doyle in his novel of that name, serialized in The Strand Magazine in 1901-1902. But England has a much older history of equally sinister, supernatural Black Dogs known by various names like Black Shuck, Gytrash, and Padfoot. They are hell-hounds or Kirk-grims or the very Devil running on four feet; they are associated with ley lines, underground streams, crossroads, and gallows. You’ll find a good overview of Black Dog folklore here.

What fascinates me is that the lore of the Black Dog is rarely found on this side of the Atlantic. Did the British immigrants leave their folklore at home? Were tales of Black Dogs discarded by newcomers who feared they would be called ignorant or superstitious?  I don’t have an answer for these questions–I simply know that stories like the ones below are mystifyingly uncommon in the states. Here are two tales of phantom Black Dogs for your Christmas reading pleasure.

In my book Spooky Ohio: 13 Traditional Tales (written for young people, reluctant readers, and storytellers), you’ll find this story from Putnam County, Ohio. It was sent to me by a lady who did not wish to be identified, who heard the tale from her father, a German Catholic immigrant. Sometimes she thought the story actually happened in Putnam County; other times she believed that it happened to her father’s father in Germany. Either way, she “never doubted the truth of the story.”

In the early 1900s, it was the custom to socialize mostly with your neighbors. Most everyone worshiped at the same church and shared the same beliefs–except one young fellow named John. He was a wild one, that John–some said the worst in Putnam County.

As he grew older, he went from smoking behind the barn to drinking–and sparking with the young ladies. He gambled and swore like a sailor and was heard to say that God did not exist and neither did the Devill, for if he did, why didn’t Satan come and get him?

People tried to get him to hush his blasphemies, but he only cursed louder and again, laughingly called for the Devil to take him away.

One evening, right before the beginning of Lent, John went to a barn dance. As usual he drank and swore and made himself disagreeable to the ladies. He had just repeated his challenge to the Devil, when an unexpected guest arrived.

It was a large black dog, which sat at attention, waiting at the door, its eyes fixed on John. Its sleek black coat seemed to throw off little sparks of flame. The dog’s ears stood up “devilishly like a pair of horns,” whispered the guests. Anyone who walked by the dog caught the smell of suphur in the creature’s foul breath. The black dog’s eyes seemed to glow eerily, the red-hot of smoldering coals.

Shortly before the dance ended, the dog abruptly trotted away. The dancers gave the beast worried looks as they climbed into their buggies and mounted their horses. As John rode slowly along, he swayed back and forth in the saddle, singing and swearing and calling on the Devil to come join the party.

Suddenly the black dog hurled himself out of the undergrowth. John’s horse reared up, screaming. John fell, slamming his head into a fence post. He died instantly, his skull shattered.

The black dog didn’t even stop to sniff the body, but trotted off into the night and was never seen again.

Coincidence? Or was it the Devil, so often invited, coming to claim his own?

Then there is this story of what appears to be a walking-dead Black Dog, from 1870s Minnesota. [You’ll find this story in The Ghost Wore Black: Ghastly Tales from the Past.]

On the evening of the 25th, ult., a harmless dog was shot by William Richardson, while passing through his premises accompanying some children to a writing school. On Friday night, the 4th inst., the apparition of said mastiff made his appearance at the gate of Mr. R. about 11 o’clock at night. Mr. R. being aroused from his sleep by the voice of howling mourning and wailing with ferocious scratching at intervals, sprang from his bed and rushed to the front door, and on opening it his own dog ran into his house and took refuge under the bed. Mr. R. tried in vain to [illegible] his dog, but could not get him out of the house. He started out himself in the direction, from whence the voice came, put his hands upon the fence in the act of jumping over, which brought him in immediate contact with a large black dog, poised on his hind legs, eyes dilated and mouth open, having every appearance of a ferocious mad dog. Mr. R’s bravery suddenly left him; he was then taken with a retrograde movement, bounded into the house, and in a few moments returned to the scene with a loaded gun. He took deliberate aim and fired at the black object, but a few yards from him, when lo! And behold, the dog or apparition immediately vanished in the smoke of the gun.

A short time after the above occurrence, Mr. S.M. Frogge, living near Mr. Richardson’s, was aroused from his slumbers by a singular noise outside. Running in haste to ascertain the cause he stumbled over this same rabid animal. He gave one prolonged scream, calling on his wife that he had been bitten by a mad dog. A young man boarding with the family was awakened by the screams of Mr. F. and others of the household. On learning the cause of the confusion, he immediately seized several sticks of stove wood, and hurled them in quick succession at the phantom ghost. To increase his fright the object moved not. At this juncture the young man bounded into the house and into bed, leaving the family to take care of themselves.

Soon after this the family of J. Lake was awakened by an incessant scratching at the door. Mr. L. arose and opened the door. What a frightened scene met his gaze. There stood the same dog monster, poised on his hind feet, fore paws elevated, and with mouth open, ready to pounce upon his victim. Mr. L. shrank back with a terrific yell, seized his gun, and discharged the weapon immediately in the face of the ferocious looking object. A terrible shriek rent the air as of someone in terrible agony. Mr. L. shut the door to exclude the terrible noise outside. Shortly after the wife went to the door and looked out. The apparition had disappeared and everything was quiet.

Early on the following morning Mr. J.R. Frogge went to his barnyard to feed his stock, on, on going to the corn crib, what did he observe but the ghost dog with his head projecting out from the corn crib door as if ready to jump upon his prey. Mr. F. went back to the house and procured an ax, with the determination to exterminate the brute, and had advanced to within a few paces of the dog, to find him perfectly lifeless.

This dog is known to have been dead for the last two weeks. How the poor cur managed to carry his lifeless carcass around and make so many frightful visits is the mystery.