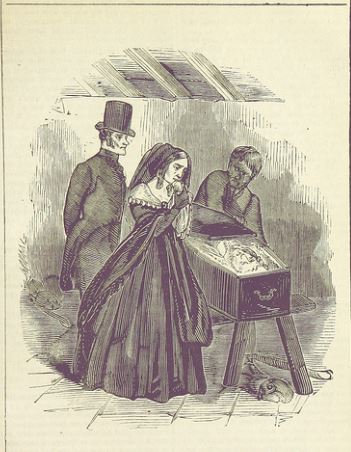 The Frost Coffin. Man and woman viewing a corpse in a coffin, 1848, similar to the frost coffin image.

If you’ve been reading this blog for any time, you know that I have a particular interest in mysterious images, whether “lightning daguerreotypes” on window panes,  a dead wife’s face on a gourd, or a phantom postman in the window.  Today, as the temperature begins to drop and I huddle beneath the eiderdown, I return to the theme of images on ice, with a brief story from Cleveland, Ohio.

What Four Policemen Claim to Have Seen on St. Clair Street Hill.

Police Sergeant Fred Megerth is regarded as a truthful officer, and the same may be said of Patrolmen Mehner, Dielman, and McMasters. They are authority for a story that was related to a Leader reporter last night. On Tuesday night an old man died in a house on St. Clair street hill. About half an hour before his death a singular phenomenon manifested itself on a window-pane of the house, where the aged man was slowly sinking into his eternal slumber. Watchman Gallagher, the guard at the railroad crossing, first observed the phenomenon, and had called the attention of the officers to it. The night was very cold and frost covered the windows. When the policemen viewed the pane pointed out by Gallagher, they shivered with horror and their strong frames shook with terror. Instead of the curious and interesting formations, generally produced by frost on glass, there was a ghastly picture. A perfect representation of a coffin, lying on a bier, was seen. Over the casket bent a man and woman, both in an attitude expressing great grief, but their heads were bowed so low that no traces of their features could be seen. To add to the realism of the representation, flowers in abundance appeared to be piled on the bier and they were so natural that the different varieties could be easily distinguished. Fully two hundred people stood in front of the window and gazed, awe-stricken, at the strange picture. After a while it disappeared and the frost assumed a natural appearance. The story is vouched for by the policemen and Watchman Gallagher, and each of them claims to be possessed of good eyesight.

The strange story was picked up by other newspapers; it even drew the attention of a gentleman in Dakota Territories who wrote to ask if it was true.

He Did Not Believe the Story.

The Leader published an account on January 26, of a curious phenomenon that occurred on St. Clair street hill. It was said that the frost on the windows formed an accurate picture of a coffin with a man and woman bending over it. The item was copied extensively, and has finally reached Estelline, D.T. A letter was received by Chief Schmitt recently signed by L O Beck & Co., asking if such a phenomenon really occurred. The letter was referred to Sergeant J. F. Megerth, as he saw the ghastly picture on the window pane. Cleveland [OH] Leader 23 February 1888: p. 3

But was it true? With such wide syndication, I wondered if the story might have been some journalist’s fantasy on a slow-news day. The characters are real enough:  the Estelline correspondent was a hotel proprietor named Lars O. Beck.  Patrolman Charles McMasters, for example, made the papers in 1890 when he kept a stiff upper lip when jilted by his fiancé. The young woman’s mother refused to let the runaway bride have her clothes and household goods; the bride asked for police aid. He also called a marketwoman a “Dutch Bloat” in 1885, pleading extreme provocation at his hearing, and receiving a reprimand. The other police officers and the watchman in the story also appear multiple times in the Cleveland papers—making arrests, being charged with intoxication while on duty, and preferring charges against a fellow patrolman for sleeping on his watch. All in a day’s work for the 19th-century policeman on the beat.

Would these seemingly ordinary patrolmen make up an improbable and “ghastly” story just to play a joke or pass the time? If they knew a man was dying in the St. Clair Street house, a prank would have been in the worst possible taste. What about the “fully two hundred” other witnesses? Perhaps the vision was just a matter of pareidolia and self-persuasion. The notion that the frost “assumed a natural appearance” after a bit is a puzzling one. It does not sound like the frost forming the image actually thawed.

Still, if joke it was, it followed the pattern of other face-in-the-window images, some of which are associated with death. For example, at a fair in Lichtenberg, Germany in March of 1871,  “About two o’clock in the day, when the fair was at its height, there was seen a death’s head, a sword, and a coffin.” [The Spiritual Magazine August 1872]. A widow in San Francisco saw the features of her dead husband on a window in her house. A murdered man’s image appeared in the window of his Preble County, Ohio home, which strangely comforted his widow. [See The Face in the Window: Haunting Ohio Tales.] The 1870s were a particularly prolific time for these window-pane spooks, which were widely reported in the newspapers, but would cases from a decade and a half ago inspire an image of the coffin in the frost?

Usually window-pane ghosts were described as etched or embedded in the glass. Recognizable frost pictures were exceptionally rare. I can think of only one case that was even remotely similar, and, frankly, if the lady had been predicting her husband’s violent death for over a decade, there was no rime nor reason to expect  any special insight from the ice this time.

READS THE FUTURE ON ICE

Akron, O., Jan. 8 Mrs. Richard Calvert of Barberton told her husband 13 years ago that he would meet death in a violent manner. New Year’s Eve she placed a bucket of water on the front porch of their hut in which the couple lived on the canal, her purpose being to see what would form on the ice. The next morning she found there the outline of a coffin and a lone woman.

“I know that the coffin stood for my husband and that the woman meant me, and I knew my husband would be brought home dead within two months. I warned him against the trains because he walked so often on the track.” Two nights ago Calvert was on his way to his daughter’s when a B & O passenger train killed him. The Evening Telegram [Elyria, OH] 8 January 1910: p. 4

Other coffins in the frost? Don’t stick your tongue to the window… chriswoodyard8 AT gmail.com