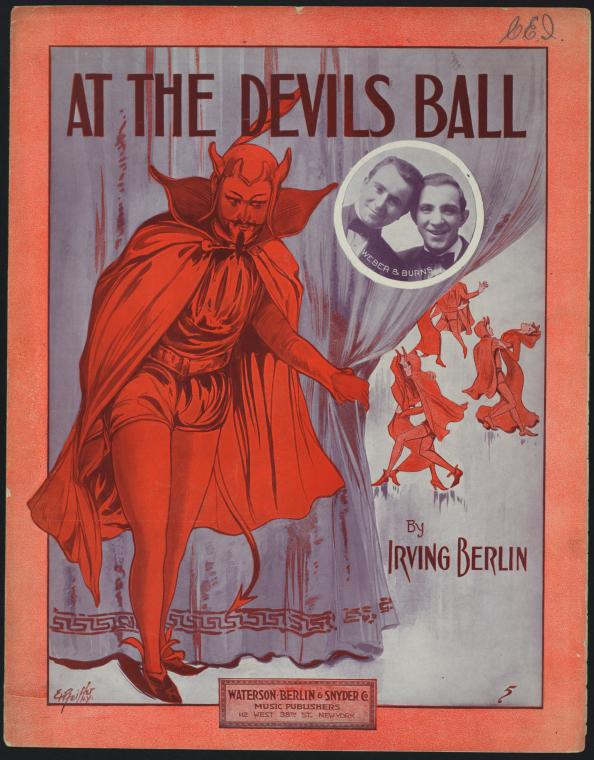 It is the eve of Halloween, when the spirits of the dead and the Spirit of Evil are said to walk abroad. One of the customs of the vintage Halloween was for girls to walk down the cellar stairs backwards at midnight, holding a candle in one hand and peering into a mirror held in the other. Some texts record that the devil was asked to reveal the face of a future spouse; others that the face of one’s husband will appear in the mirror. There is no word on how many girls tumbled, flaming, to their deaths while negotiating the stairs backwards and in high heels. And how a religious celebration got transmuted into a veritable festival of spouse-prognostication, I leave for wiser heads to decipher. In our story for today we find a wandering Spirit of Evil who decided to claim a young mirror-gazer for His own.

SAW THE DEVIL IN JERSEY CITY.

IN THE GUISE OF A YOUNG MAN.

Halloween Prank of a Young Girl Said to Have Been Followed by Her Death.

It would not be expected in the last days of the nineteenth century that any civilized community would point to the alleged fact that the devil of tradition, with hoof, horns and tail complete, had visited it and vanished in a blue flame, leaving behind him the traditional odor of brimstone. Yet that is exactly what happened in Jersey City. From Hoboken on the north to Communipaw on the south and from the North River away beyond Jersey City Heights and the Bergen uplands on the west citizens are telling each other the story that in response to the prayer of a pretty young girl His Satanic Majesty appeared in her own parlor, vanished, and that the young woman was seized with a fit and died immediately afterward.

The citizens of Jersey City are not at all proud that their city is alleged to have been selected for the appearance of the devil “in their midst” and are at a loss to account for it. It cannot be owing to its bad politicians, they argue, because Tammany Hall in this city and the “ring” in Brooklyn are equally as bad as the “ringsters” in Jersey City.

Nevertheless the story is passing from lip to lip in whispered conversations, in horse cars and on ferryboats. Superstitious persons recognize that the “devil story,” as they term it, is much more awful than the tales of ghost haunted and deserted houses, and they mention the alleged facts in a properly respectful way.

FOR STUDENTS OF FOLK LORE.

Knowing that this story in many forms was, as it were, in the air, I started yesterday to verify, if possible, at least some portion of it, for the benefit of future students of folk lore, to whose ears it will descend by tradition. And this was the story I was told:

To begin with, it started on the night of All Halloween. A young girl, whose last name is Hennessey, living in Fourth Street, in a wild spirit of fun walked backward down-stairs at midnight, holding before her face a hand-mirror, while she wished three times that the devil might reveal to her the face of her future husband.

Whether she saw her future husband’s face in the mirror does not appear, but the story says she said nothing to her mother to that effect

The next step in the story was that Miss Hennessey went with a young man to a dance a fortnight after her Halloween experience, and sometime in the evening quarreled with him and started to return home alone.

She had not proceeded far when she was accosted by a strange looking young man whom she had never seen before and who asked her if he could escort her home as she was all alone. She demurred at first, but finally consented.

Arrived at the house, the young man invited himself into the house, but Miss Hennessey became alarmed, fled up the front steps, opened the door, and slammed and locked it in the face of her companion. She ran upstairs to her mother, told her hastily of her strange adventure, and then both of them looked out of the window from the second floor.

“Yes, there is,” Miss Hennessey is declared to have cried, “Don’t you see his cloven hoof and his horns in his hair?”

Then Miss Hennessey is said to have shrieked several times in a highly hysterical manner, whereupon Mrs. Hennessey ran for either Father Kelly or Father Mooney, of St. Mary’s Roman Catholic Church at Erie and Fourth Streets [Second St.]. Returning to Mrs. Hennessey’s residence the “young man” was still there, and so was Miss Hennessey, growing more and more hysterical every minute.

The priest, it is said, declared he could see no young man, but to humor Miss Hennessey he entered into an imaginary theological argument, and after “giving the devil his due,” the “young man,” to the priest’s amazement, vanished through the window in a blue flame and there was enough sulphur left in the room to bleach half the Leghorn bonnets in Jersey City.

Miss Hennessey’s tragic tale ends with her going into a trance and dying the same night. Mrs. Hennessey declaring that it was mighty lucky for the soul of her daughter that she had the presence of mind to call the priest to perform the last sad rites.

There are several variations to this story. One popular version is that the young woman was crossing a Cortlandt street ferry boat when the devil appeared in the person of a handsome young man.

He addressed Miss Hennessey, who was alone, and by some mysterious influence got her to go out on the forward deck. Suddenly he seized her in his arms exclaiming: “I have come for your soul.”

He attempted to jump overboard with her, but Miss Hennessey happened to be wearing a necklace from which depended an ebony cross. She had the presence of mind to hold it up before the “young man’s” eyes, when puff! He was gone.

There was no brimstone in this story, but Miss Hennessey fainted, and was revived by her fellow passengers, and went home and died after a few days’ illness.

Another story was that Miss Hennessy lived on Jersey City Heights, and that the aforesaid “young man” found her late at night on a horse car. There were a few passengers and a small dog on the car.

When the “young man” declared that he came for her life, Miss Hennessy snatched up the small dog and cried: “If you came for a life, take that dog’s life.”

Then the “young man” snatched the dog and disappeared with it in a blue fog.

I asked Father Mooney, the junior pastor of St. Mary’s Roman Catholic Church, in Jersey City, yesterday if he knew of the recent death of a Miss Hennessey in the parish.

“Oh, you have come about that devil story, have you?” said Father Mooney, with a smile. “Well, I’ve heard that story in several different forms. It seems to have gone all over the country.

“It was rehearsed to me one afternoon in the parish house by a young girl about as you describe it. There was one exception in the details. The ‘young man’ is said to have declared;

“Then a cat came into the room, the ‘young man,’ or the devil, snatched it and vanished through the window.

“As a matter of fact,” said Father Mooney, “no Miss Hennessey has died that I know of. I have not been summoned to take part in any such scene or anything that might be mistaken for it. We have heard so much about the devil story that it ought to be denied to save us the bother of more conversation about it.”

Father Kelly said to me with a smile:

“The story has been growing and growing until it is talked of everywhere. I belong to a big club not far from here and we members have had the greatest amount of sport comparing the different devil stories. We have tried to trace it to its source, but so far have been unable to do so.”

I sought for a Miss Hennessey who had died recently in Jersey City and was forced to conclude, like the famous “Mrs. Harris,” there “ain’t no sich a person.” [See Dickens’s Martin Chuzzlewit.]

The story had, indeed, gone all over the country. It was widely syndicated well into 1894, sometimes with the priests’ disclaimer; sometimes not. And what about that disclaimer? Father Mooney answered the question about a Miss Hennessey’s death a touch evasively, don’t you think? But it is amusing to think of the variants being told and compared at a local social club. It is also intriguing that the unnamed reporter saw this as an opportunity to collect folklore for future generations.

For an urban legend, it packs quite a few folklore motifs: The Halloween mirror-gazing trick. The devil as a handsome young man. The young woman tempted by the devil at a dance. Spotting the cloven hoof of the otherwise human-shaped devil. The devil claiming a cat or a dog when outwitted by a human soul. The devil baffled by the cross.

Several of the articles included the subheading: “WARNING TO FAIR YOUNG MAIDENS Don’t Accept Escort from Unknown Gallants For They May Have Horns and Cloven Hoofs and Vanish in a Blue Flame.” Like so many urban legends, the story serves as a sexual cautionary tale for young women of the sort we find even today. “Don’t open the door!” “Don’t go parking in Lover’s Lane.” “Pray for Rosemary’s baby.”

Earlier versions of this tale or even the ur-text? I suppose if the local priests couldn’t spot the origins of the story—assuming they didn’t create it themselves to stop young parishioners from dabbling in pagan prophecy rituals—it would be even more fiendishly difficult for us today.

Undine of Strange Company reminded me that I’d written about the many suggestions that New Jersey was the earthly location of Hell in “The Road to Perdition: Hell Located”