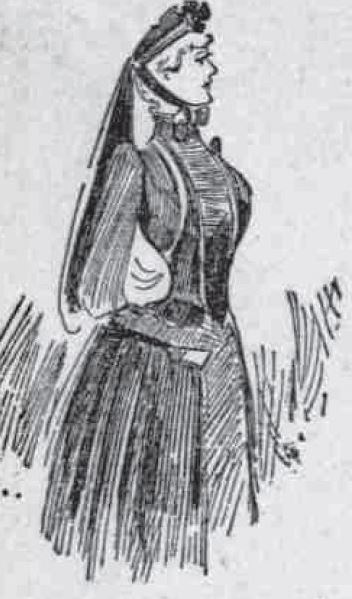 The Woman in Black in the Window

The subject of mysterious apparitions seen—yet not seen—through a window or imprinted on window glass are a source of endless fascination for me. Today we visit Primghar, Iowa where a group of local men saw an ambiguous apparition, which generated the startlingly anodyne headline:

A Primghar Editor Sees a Woman and Writes About It.

Primghar [IA] Leader, Dr. Longshore, T. B. Woods, D.O. Dockendorf, Jake Schlesher, Bert McClelland, of Sheldon, and Dr. Parker, of Sutherland, were among our callers Friday. While here they viewed the “new woman” that is constantly in view in the Commercial Hotel window from the Leader office, and failed to solve the mystery, though every effort was made to do so. This vision or apparition was first discovered by George Eames, foreman of the Leader office, but first made known to the public after the following manner, an account of which we give below simply to give the reader an idea of the distinctness of the vision. Some days ago Dr. Archer, a dentist from Cherokee, who makes a professional visit to Primghar, having his office in the upstairs parlors of the Commercial Hotel, took occasion to call at the Leader office to look over our exchanges, see our new press work, etc. The proprietor of the Leader was setting type at the window in plain view of the entrance to the Commercial hotel office. The doctor said: “Mack, I’m going over to see the press (located in another part of the room and being operated at the time) run, and, as I am expecting a lady in this morning to have her teeth repaired, if you see a lady enter the hotel please call my attention to it.” In a few minutes he came over near where we were, and, looking across in  the hotel window, exclaimed, “Gosh! There is that lady waiting for me,” and away he went to attend to the wants of his lady patient. Upon entering the hotel office and finding no lady there he concluded she had been shown to his office room, and proceeded there himself, but, to his great surprise, found no one in waiting. He returned to the hotel office, and, in response to his inquiries, was told that no lady had entered the hotel office. He came back to the printing office, and, after a short time, struck the focus again, the woman appearing again. “Great Scott!” he exclaimed, “there’s that woman; I’ll see whether or not I’m to be trifled with,” and another run was made for his office with the same result as before. The doctor is rather short of hair, and what little he has is of the rusty kind, but by this time he was getting decidedly red headed. He accosted the landlord in a “sandy” manner, thinking a job was being put up on him. The landlord pleaded for his life, declaring in language contrary to early instruction, that no woman had been in the room. By this time the half dozen guests who had been seated in the hotel, were on their feet trying to pacify the doctor, at the same time verifying the landlords’ statements. After cooling down a trifle the entire party proceeded to the Leader office, and, to their utmost surprise, found this to be a case where all parties concerned were in the right, as the form of a woman was plainly see in the hotel office through the north northwest window. We are glad to report that the doctor and Landlord Whitehouse shook hands and made up, satisfied, that their introduction to the “new woman” will never be forgotten.

Since the above discovery our office has been visited daily by scores of people to see this apparition. Last Friday and Saturday over 200 persons, men, women and children, visited the Leader offices to witness the mystery. Below we give a very perfect description of this strange apparition, which was published last week in the Sheldon Daily Eagle:

“Being in Primghar on February 27, we called during the day on the Leader proprietor. Being modest Pomp McCormack, he was reluctant about showing his new acquisition, viz, “the new woman,” having at last pointed her out across the street, we became interested, and, aided by ten or a dozen people, sought to locate the shadow. The fact remains that the form of a woman of well-developed mold, and trimly attired in black, wearing an old style fascinator [triangular knit scarf] about the head, standing in an apparent facing position to the observer, with left arm protecting her gown, can be seen reflected in the street window of the Commercial hotel, just opposite the Primghar Savings bank and the Leader office. She can be seen at all times of day, cloudy or sunshine. For weeks different parties have tried to locate the cause or object that may throw this shadow or focus in its present position.

Well, that seems a fairly straightforward example of a “face in the window” figure with the sub-fusc fashion sense of The Women in Black. In its ambiguity—is she a mere silhouette on the glass, a real, if elusive lady, or a true Woman in Black?—the story reminded me of the Phantom Postman tale posted a short time ago. But something about this article—perhaps the puff for the Leader’s new press—made me wonder about the accuracy of the report. As is usual you have men whose veracity cannot be questioned as witnesses: Dr. Longshore, for example, was a pioneer physician and county recorder of whom it was said that he saved the life of a child who had swallowed lye by saying, “My God! Cram a lot of lard down its throat and make soap out of the lye.”

D.O. Dockendorf was a real-estate agent, Dr. Guy Archer was a dentist until he gave it up to run a fruit farm, Dr. Longshore may have been related to Dr. Anna Longshore who was accused of performing a “criminal operation” on a young lady in 1913.

“Pomp” M’Cormack, and here we find a hint that not all is as it should be, was known as “an inveterate joker, not merely with individuals, but with the whole community.” He was known to disguise himself as a Native American on the war-path and a thickly-brogued Irishman looking to buy property. He founded the “Primghar Art League,” a group of thirty men who “conducted a weekly discussion of current events and questions.” One wonders how much of it was conducted on the Liar’s Bench?

Or do I wrong them? Any Primghar locals out there who can tell another version of the story or describe how the window where the Woman in Black appeared was whitewashed to discourage the curious?

chriswoodyard8 AT gmail.com, who is available at all times of day, cloudy or sunshine.