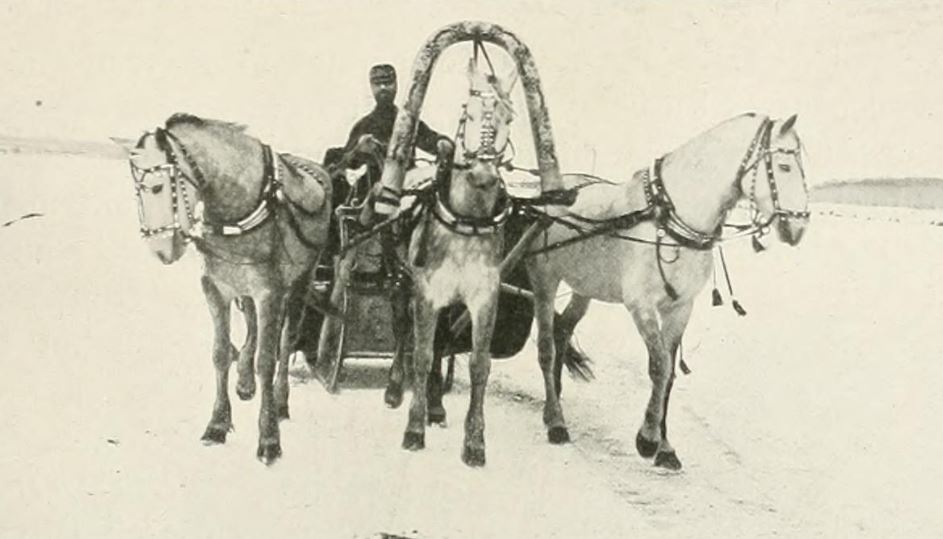 I send you a very interesting story of an apparition, related by Mr. Witold Chlopicki in his book ‘Memoirs of a Spiritualist,’ which has just appeared at Warsaw:—

For several years a little village in the centre of Russia had been garrisoned by a certain regiment of Cossacks. In the spring of 1890 the colonel of this regiment received orders to remove with his men from the village in question to a district about one hundred and sixty versts distant. When the moment of departure arrived, the Colonel was much embarrassed by the difficulty of finding a substitute for his coachman, who had been lying for some time seriously ill in the hospital, and was as yet unable to resume his duties. Wanka—for that was the coachman’s name—was a very excellent fellow, sober and faithful, and sincerely attached both to his master and to his horses. For several years he had discharged his duties with zeal and fidelity, and the Colonel, therefore, found it difficult to reconcile himself to the idea of another man taking Wanka’s place. However, there was no help for it. He was compelled to take the first soldier who offered himself for the vacant post, but before he left he warmly commended his invalided servant to the care of the hospital doctor.

The regiment was well on its march when it came to a road bordered on both sides with trees. Suddenly the soldiers heard a rumbling as of carriage wheels behind them, and a voice crying to them, ‘Look out! Look out!’ Turning round, they saw a ‘troika’ rapidly approaching, drawn at a gallop by three superb grey horses. The ranks were opened to allow the vehicle to pass, and, as it did so, the soldiers, to their great astonishment, distinctly recognised in the person of the driver on the box no other than the man whom they had left behind in hospital, seriously ill. Wanka, on his part, as he drove through the ranks, bestowed on his whilom companions a friendly smile and nod of recognition.

The Cossacks could not get over their amazement. ‘Here is a strange thing!’ cried some of them, ‘not only has Wanka recovered already, but he has even been able to at once find another berth.’

‘And such a berth, too!’ responded others. ‘Why, the carriage and horses look as if they had just come from the hands of the dealer. The artful rogue! His sickness must have been all a sham; he has evidently had this new berth of his in view all the time.’

The carriage and horses disappeared in a cloud of dust, but not before the soldiers had had time to notice that the vehicle had two occupants, whom, however, they were unable to recognise. Just then one of the officers came up and inquired if it was not Wanka they were talking about, as the Colonel had seen him, but could scarcely believe his eyes; and he wished to know if it was really the faithful servant whom he had left dying in the hospital. In reply the soldiers affirmed that the driver of the troika was undoubtedly the Colonel’s late coachman. They had all seen and recognised him, and, judging by the smiling salute he had given them, the recognition was evidently mutual. The Colonel thereupon ordered that as soon as they reached the next stopping place a telegram should be sent to the staff of the hospital at the village they had left, asking for news of Wanka.

In the evening the regiment halted at a little town, and the telegram was at once despatched. The next morning the Colonel received a reply to the effect that Wanka had rendered up his spirit to God at one o’clock in the afternoon of the previous day—that is to say, at the very time when the Cossacks saw him on the box of the strange carriage.

All the very interesting details of this strange apparition can be obtained from Mr. Witold Chlopicki—a very worthy man, and an old Spiritualist. His address is No. 22, Ulreca Bracka, Warsaw.

This is a very different sort of “road ghost” from the usual one, seen at twilight or dusk, who can never be overtaken, and whose face remains invisible until it decides to reveal the horror, like the Nightwalker. [I’ve written about faceless road ghosts in The Ghost Wore Black: Ghastly Tales from the Past.] The coachman in this story seems to have been only too happy to let everyone see and recognize him in broad daylight. A farewell appearance? The occupational equivalent of a crisis apparition, telling the witness that he is well and happy? Are there troikas and superb grey horses in the Afterlife?

Witold Chlopicki’s books, published from about 1872-1898, do not seem to have been translated into English and are held in only a few libraries in Poland. He may have also published a Spiritualist journal from 1902-1907, called Dziwy Życia or “Wonders of life: biweekly illustrated devoted to little-known natural phenomena research in the field of psychology, somnambulism, mediumship, telepathy, clairvoyance, and magnetism.”

Any more road ghosts or a translation of Chlopicki’s works? chriswoodyard8 AT gmail.com