The Psychic Howler – Vintage Ghost-hunting Tools  A vintage ghost-hunting tool, the  Sthenometer, designed to measure the “nervous force” of the human body

Life was simpler for ghost-hunters of the past: one held midnight vigils in drafty country houses, waiting to see if any of the objects ringed with chalk had moved even a fraction of an inch, methodically logging weather conditions and temperature changes, and eating packets of sandwiches, washed down with something warming from a flask. There were no Ghost Boxes, magnetic-field detectors, or black t-shirts.

But there was the cutting-edge, ghost-detecting machinery of the American Psychic Institute and Laboratory. A chapter in No, Not Dead; They Live! A Study of Personal Immortality From The Standpoint of a Physician and Surgeon by Wilson G. Bailey, M.D., gives details:

Two of its large pages are given by the New York American of August 28, 1921, to an account of the laboratory established in New York City by the American Psychical Institute for the purpose of opening up unquestionable communication with the departed. The laboratory work is under the direction of  Dr. Hereward Carrington, the expert who began his career in psychic research as an expert employed to expose Spiritualism, but who, instead of scoffing, remained to pray, and has frequently given accounts of his actual, face to face, communication with the so-called dead.

The laboratory contains over one hundred elaborate scientific instruments and has rooms for special experiments.

One of the instruments is a mirror galvanometer for learning whether the spirit talking through the medium is a real spirit or only part of the medium’s subconscious mind. Certain words are read to the medium when the latter is in a normal state, and the emotional reactions, such as quickened heart beats, are noted. Then, when the spirit speaks through the medium in a trance the emotional reactions are again noted and if the reactions are similar to those obtained from the medium when in a normal condition the investigators conclude they are dealing with the medium’s mind. If the reactions are different the investigators conclude that they are dealing with a spirit or with an absolutely water-tight compartment in the medium’s subconscious mind. Hitherto it has been deemed impossible to establish the existence of such a compartment.

Another instrument is a galvanometer for testing soul force from the body. Then there is a spirit Dictaphone and sound amplifier, by means of which sounds, raps, and in fact noises of any sort will be received and recorded in the absence of the medium and all other persons.

A psychic vibration detector lights a bell and thus points out the sitter whose energy is being drawn upon by a spirit.

A volometer records the pressure of the will, for instance upon the end of a see-saw arrangement absolutely beyond the control of the operator, and this shows the presence in the operator of some outside spirit force.

An oscillograph registers the vibrations of the body. The sthenometer shows the varying degrees of psychic force, or lack of psychic force in the sitters, while the psychic “ululometer or “howler,” reveals the presence of any disembodied energy within its field by a loud noise…. 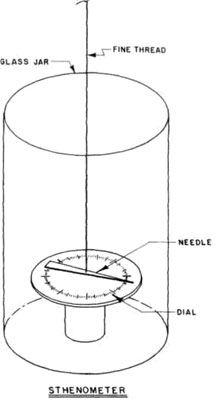 The Psychic Howler – Vintage Ghost-hunting Tools Diagram of a sthenometer.

Instruments noted in other sources were the lastrometer, “an apparatus containing a sulphide of zinc screen, which glows when a person approaches. The glow varies according to the psychic energy of the person, and it is reasoned that a spirit or discarnate agency might reveal its presence through this glow.” Pittsburgh [PA] Press 23 April 1922

And the dynarruostograph for the measuring of departed personalities. The Walther League Messenger, Vol. 38, 1929.

The ululometer seemed to be the item that most often caught the attention of the press. Hereward Carrington describes it:

A ghost-hunting machine has been invented. The ghost detector, the only scientific mechanism of its kind in the world, is the ululometer—or “psychic howler.”

This machine, being perfected at the American Psychic Institute and Laboratory, will solve such problems as the ghost mysteries in Antigonish, Nova Scotia, and Alva, Okla.

Haunted houses will give up their secrets only by the scientific use of the ululometer, cameras, phonograph records and sound amplifiers…

Have ghosts minds and body? We do not know about the mind, but science says a genuine ghost has a body, an intangible thing lighter than air.

I would measure these phantom things—photograph them—record the sounds they make.

The ululometer is an intensely sensitive coil of 3000 finely tuned copper wires which may be set up in a room believed to be haunted, and connected by wires with a receiving apparatus in another room, where the observer listens through telephone receivers.

The ululometer reveals the presence of any energy, living or disembodied—human being or ghost—that comes within six feet of the coil.

Does a ghost breathe? Does it have a heart that beats? Nobody knows. But just as the delicately adjusted ululometer records the electric energy radiated by a living person’s heart and lungs, it would by a variation in the electric current passing through the coil record any form of energy possessed by a spirit or astral body.

If it—ghost or human being—approaches close to the coil there is a howling noise of very loud pitch audible in the receivers, which increases in pitch as the body comes nearer.

Ghostly sounds thus can be recorded and preserved on phonograph records, by the use of an amplifier. And the camera may catch whatever emanation or materialized substance exists before the phantom form dissolves.

Despite the strings of scientific nomenclature, all of these o-meters still purport to measure the intangible: “soul force,” “psychic energy.”  They are, despite Carrington’s earnestness, the psychic-researcher equivalent of mood rings. Paranormal research is inherently unscientific—witnesses are, for the most part, dealing with spontaneous events that can be observed, but cannot be replicated and almost certainly cannot be weighed or measured inside a laboratory.

Yet nothing has changed in the last 90 years. With the proliferation of ghost hunting groups and TV shows comes a new collection of gadgets: EMF meters, thermal scanners, night-vision goggles, motion detectors, and dowsing rods with their “scientific” protocols. Perhaps it is time to step away from the machines and think about what we are trying to accomplish and why  we are trying to “prove” the unprovable.

I feel a certain historian’s nostalgia for the trappings of those earnest, innocent early days of psychical research. Perhaps vintage-style ghost hunting clubs will have a resurgence, bringing back old-time séances with mysterious music played on caged squeeze-boxes by unseen hands, flour sprinkled to detect footprints, thermoses of tea, Harris Tweed….

I, for one, miss the accordions.

To celebrate National Ghost Hunting Day and the World’s Largest Ghost Hunt, see The Professional Ghost, Charlie Dove, Ghost Eradicator, and my recent posts on The Black Ghost, parts one and two.